Smartick Coding and the Importance of Programming

What is Smartick Coding?

Every certain number of sessions, students that do Smartick math are presented with a Smartick Coding session. That way, they work on computational thinking that, we will discuss in this and future posts, is very closely related to mathematical, logical, and abstract thinking.

Smartick Coding is an ambitious project that works from the most basic control flow structures until Boolean algebra or the basics of distributed computing. Through programming, children learn to break down problems, analyze and optimize solutions or modeling, which are all basic skills for solving problems.

With Smartick Coding children are faced with the task of learning a subject that they do not usually see in school and are only guided by the platform. This exercises two fundamental skills for citizens of this age: autonomous learning and computational thinking.

The adventure begins with a small blue robot named Robby who introduces the children to the world of programming. Smartick Coding sessions consist of moving Robby through different scenarios, using the correct commands.

The student is guided through each coding concept that is worked on. The sequences increase in difficulty until the student really dominates the concepts of sequence, loop, and condition. From drawbridges to tile type sensors, various elements surround the robot to prompt the use of different types of control structures as the child moves through the curriculum. Unlike other programs, in every module children are presented with exercises to read, debug, and of course, write code. 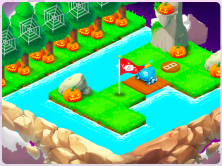 Differences between Programming and Robotics

Although all robots are programmed, not all programming is for robots! With Smartick Coding children will go beyond what they can reach with robotics alone. To do this they also solve exercises that work on Boolean logic and become familiar with building conditions. So, for each topic worked on, an appropriate game has been designed to familiarize them with the concept. Always insisting on reading, debugging, and writing code.

Smartick Coding has one of the most extensive curriculums in a self-paced learning system and we add new content and AI improvements every five weeks.

Children develop computational thinking skills such as breaking down problems, finding patterns, and logical and abstract thinking. All with the help of a guided system gradually developed by experts in Computer Science Didactics.