I’m sure you’re already familiar with decimal numbers, but have you ever wondered: “What’s the best symbol to separate them from integers? In today’s post we’re going to talk about this tiny symbol that we use so much, but which also changes depending on the country you might find it in! The International System of Units recognises two decimal separators: the point and the comma. They must be written on the line, on the same line as the digit, like this: 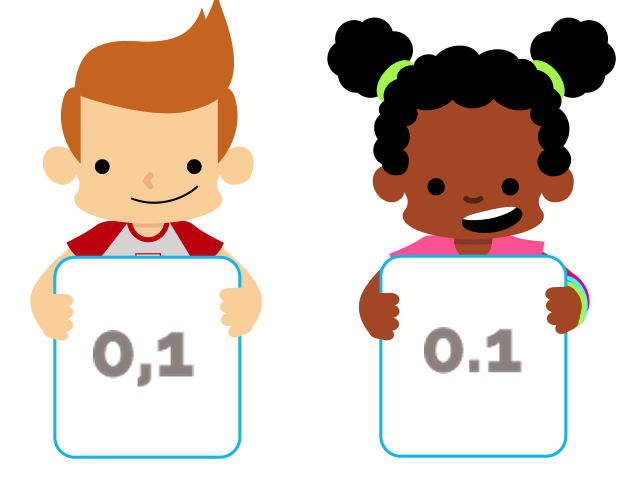 The use of decimal separators

As you know, decimal separators are symbols used to mark the difference between the whole and the decimal parts of a number. Although an attempt was made to unify the use of a single symbol, both are now accepted, and this can cause confusion.

Therefore, we’re going to look at which symbols are used depending on which part of the world you’re in:

The majority of European countries use the decimal comma. Among them are Spain, France, Norway, the Czech Republic, Denmark, and more. However, it’s important to note that the United Kingdom is an exception because they tend to follow the Imperial System, which uses the decimal point. Curiously, Switzerland and Liechtenstein are different, as they use a point as a decimal separator, and an apostrophe (‘) for thousands.

The countries found to the north, like the U.S.A and Canada, use the decimal point, although the comma is used in the Francophone area of Canada as well. Countries closer to Central America, such as Mexico and the Caribbean Islands, also use the decimal point. However, South American countries such as Venezuela, Chile, Argentina, Colombia, and Uruguay, among others, use the comma.

There is no official standard used across Africa, but we know that some countries like Zimbabwe, South Africa, and Cameroon use the decimal comma. Others such as Botswana, Kenya, and Nigeria, use decimal points.

Australia, New Zealand, as well as the islands and archipelagos close to them, use the same system as the rest of the Anglophone countries. Therefore, the decimal separator they use is a point.

Different countries in Asia use different decimal separators, sometimes within the same country! The decimal point is generally used in countries such as China, Japan, Malaysia, Singapore, Sri Lanka, The Philippines, etc. Some others use the decimal comma, as is the case in Indonesia and Mongolia.

To separate thousands, the International Bureau of Weights and Measures declared in 2003 that the proper way to write numbers with more than four figures is by separating them into groups of three and leaving a space between each group. When it comes to a large figure with decimals, we write the decimal separator in its corresponding place and then we separate the figures into groups of three (leaving the space between each group of three), counting to the right or to the left from the symbol. This fantastic blog gives a great summary along with examples.

Despite this, it’s still common in countries that use decimal commas to find thousands separated by a dot. And in countries where a point is used as a decimal separator, a comma is usually used to separate thousands.

So, for example, twelve thousand five hundred with a decimal of five zero is written differently depending on the country:

Keep in mind that there are many countries, and each one has a different monetary and measurement system. Therefore, their decimal separators also change. Register with Smartick and keep learning with us!