Smartick in Yago’s Two Worlds: The Hospital and Home 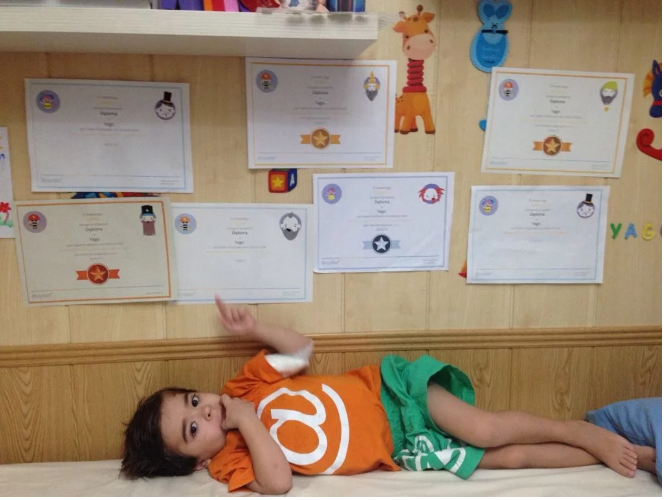 Yago is eager ‘to take on the world’ because the world is a new place for this 6-year-old. He has spent five years in the hospital, two and a half of which were spent in strict isolation. After being discharged, when it would get dark outside he would say ‘I want to go to the house’ and he meant his room at the hospital. He missed the nurses that became like family and the doctors he knew so well. And the sounds of the firefighters across the street that would entertain him when his mother, Maria Jesus, would get him out of bed with a simple ”Look Yago! Firefighters!” Now, of course, he wants to be a firefighter. But he also wants to be a doctor, like Dr. Vivancos. His mom also felt sad about how Yago dealt with the trips to the operating room, how normal it had become, ”because we never hid anything from him,” she explains. ”If we gave him the scalpel, I’m sure he could do it on his own,” joked the doctors.

Now, he’s in first grade and he’s been doing well with math because he’s been doing Smartick since he was in the hospital. He finds it a bit difficult to write because he has almost no strength in his fingers and his fine motor skills aren’t fully developed yet. He’s getting used to the noise and disorder that happens in everyday life. ”Mom, children yell a lot and sometimes they don’t listen,” Yago tells his mom. ”Of course, he is used to everyone following directions at the hospital.”

Javier is Yago’s older brother. Certain things needed to be taken care of and others became less of a priority. Siblings, she tells us, are also affected. When fighting a serious illness at home, they fade into the background, overhear adult conversations and feel scared. Now it’s different. They are home together and each with a wall full of Smartick diplomas. 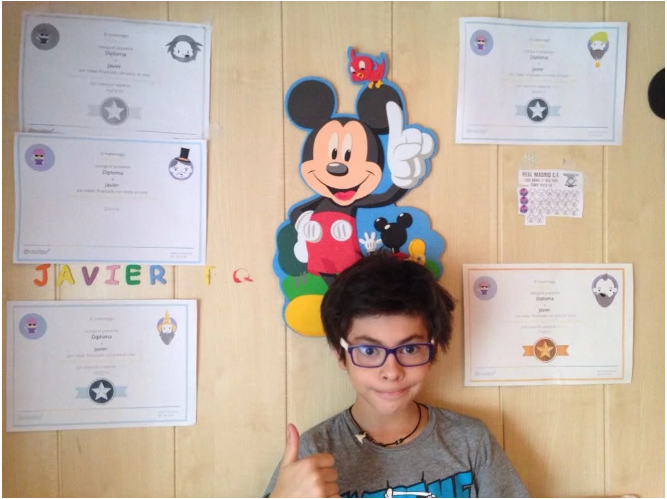 ”Yago has a lot of self-esteem. He’s getting ahead. We’ve been telling him he ‘can do it’ for years. He’s been a king, of course.” But it’s true that during all this, his brother wasn’t given the same attention. ”Now the two of them do Smartick together every afternoon and they pick on each other. They look through the different things they can get and how many ticks they need. They have to get more diplomas than anyone, same with the stars, the pets, everything,” explains Maria Jesus. But they also give advice or explanations: ”You think too much” or one complains that the other’s session is easier. We’ve told Maria Jesus that some people do not approve of competitiveness in education and she says ”Well I don’t know what world those people live in, life is a little like that. My children compete and get angry when they can’t do Smartick.” She also says that Yago continues doing his sessions while receiving treatment.

Yago knew the world through his tablet, hospital window and from conversations with adults. That is why he has such a rich vocabulary and infinite curiosity. He never stops asking for explanations. His mother never grew tired of answering them. Elena Morán, a psychologist on the Smartick team and a Juegaterapia volunteer, got a chance to meet him while at the hospital. She recommended that he try the 15-minute Smartick sessions and Yago did them daily, even after a round of chemotherapy. He laughs when he hears the excuses that some kids make to avoid doing Smartick every day.”Yago needed stimulation” explains his mom, ”so we tried several things on the tablet and he said ‘Smartick is cool.’ ” Knowing that other children also do it motivated him and raised his self-esteem.

Now the three of them are getting used to coming home from school, doing homework, and eating at home together. Yago still has to go to the hospital twice a week, where he knows everyone, and can’t be more than 40km away from there. Yago has an ”impressive maturity” but sometimes will get engrossed looking at a row of ants he hasn’t seen in his life or admiring the shadow of his body on the ground – which is more present now than when he was under the artificial light in the hospital. ”His life experience is very different from others, sometimes he’s an old man and sometimes he’s an astonished baby,” says Maria Jesus. That maturity and capacity for wonder, combined, make him follow a row of ants no matter how far it goes and wonder about everything. Like the time he was surprised by the wind coming up out of a metro grate. Or the first time he got wet in the rain. Or when he stayed watching the washing machine for a while exclaiming ‘Mom! There are suds!”’

But his social skills need to be worked on, which requires getting used to a routine that is unpredictable, unlike the hospital. To understand that children sometimes shout or they don’t listen. ”But he is managing. He’s befriended the two strongest children in class because he has a hard time carrying his backpack which can be heavy,” says his mom. He’s still curious and asking questions.

Before entering school he was given an evaluation. ”He is good at math because he is a very logical thinker. But he’s a bit unbalanced because he needs to work on fine motor skills and he lacks practice, he’s three years behind at school.” There are teachers who are blown away by his questions. ”In isolation, everything was explained, we were one, glued together. We spoke to him like he was older. When we were arguing, he negotiated.”

I explained to her that treating him like an adult clashes with some of the extreme protection that many parents now practice. ”Sure,” she replied ”but they fall apart when they see a bit of the real world. You don’t do them any good buttoning their shirts for years. In fact, unconsciously, you’re crippling them. It doesn’t help them.”

There’s no more room on the walls for the kid’s diplomas. Meanwhile, at Smartick, nothing makes us happier than helping and hearing from them. We enjoy meeting mothers like Maria Jesus. We are happy to know that Smartick is one of the things that has been a constant in Yago’s two worlds — his home and the hospital.