Smartick Returns from BETT Recharged and Ready to Keep Working 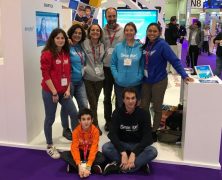 We said that we would come back and tell you, and here we are, back from BETT, the most important Ed-Tech fair in the world. It was held in Exhibition Center London, ExCeL, located on one of the oldest piers of the Thames. Our impressions? We’ll go through them one by one.

and after four days it gave you the feeling that you could have missed something. For example, there were three auditoriums with programs going on simultaneously. The exhibition center had several entrances to three main hallways with hundreds of different exhibitors. We were grateful to be beneath the Spanish flag with ICEX because it made us easy to find. We also discovered that being on a corner was a great way to cater to two aisles.

Apple was not there, they had organized an event for teachers the day before in London, but Google and Microsoft were both there with impressive booths, which had space for small auditoriums where they could explain their company’s different programs to the classrooms. In fact, we were across from Microsoft, David and Goliath, but we will get to that in the following point.

Smartick was a small company compared to some of those at BETT, but we were not the only ones of this size. My personal perception is that with a large booth, people did not know where to start looking and there were huge screens everywhere. However, with the smaller companies, you saw how the company staff were willing to talk about their projects and how they worked. We were happy too because we did not see any product with a purpose as clear as ours: tailor-made mathematics for every child for only 15 minutes a day. What’s more, is we came back convinced that our purpose of giving parents the best of mathematics, without them having to spend hours diving into the internet, is a resource that is becoming more and more valuable.

We found that along with teachers and educators responsible for schools, there were also product distributors from different regions. There were Asian companies (we spoke with people from Singapore, China, India, and South Korea), as well as Latin Americans, Russians, Norwegians, Danes, Frenchmen, Germans, Italians… and of course, Spaniards. We were very excited when we were greeted by a family from Coruña, Ana, Carlos, and their daughter Gabriela, who told us that she has been using Smartick for some time. As well as by Juan Luis, now working for Amazon in Luxembourg, who has four Smartick kids. It was also a pleasure speaking with Javier Tourón. It is admirable how he is always looking for resources to use with gifted children.

This was one of the most repeated phrases at our booth, which was met with skepticism by some teachers and intrigue by others. We explained that we have a team of mathematicians and teachers who study different ways to teach mathematics in depth and we then apply them to our platform, which is updated every six weeks. This allows children in one hundred countries to use Smartick. We are a mathematics training method that goes well beyond primary school books and adapts to each child.

The trend to not use English

We do not know if it is an important trend or not, but we learned that children in Nordic countries do not begin to learn English in primary school and we were able to speak with one teacher from Norway who told us that his students use different languages in the north of the country. There were also some Israelis who told us that they would only be interested in Smartick if we translated it into Hebrew, Icelandic for Icelanders, or German for Austrians.

But we will be in Brazilian Portuguese

We will continue with our commitment to English and Spanish, but we announced at BETT that we’ll have a version in Portuguese for Brazil, which is almost ready. We mentioned this because we spoke with many Brazilians.

Wonderful products we discovered at BETT

At the ICEX booth, we were next to Chiara. There, they showed us how virtual reality glasses can upload different scenarios with real actors in auditoriums to practice public speaking. At the end, they give feedback about the tone of voice, use of vocabulary, and speaking confidence. They are doing very well and will continue to do better because in Spain, and in the world, we do need better mathematics, yes, but also better public speaking.

We passed by Israel’s booth and found out about a great Artifical Intelligence fair that will be held in September. We were struck by Egypt’s huge booth, where they seemed to be turning education around, (”lie”, said one of the directors of a school). In the French one, we discovered Marbotic and are looking forward to trying it with younger children, it was very interesting to see how the pieces of wood interact with the screen.

We have definitely come back recharged and ready to continue with our work because we have confirmed that we are a unique method. Yes, there are those that follow a national curriculum. There are millions of free exercises online. But no one has bothered to put together the perfect plate of mathematics adapted to the needs of each child. No one has mixed mathematics and a bit of gamification to improve motivation. Some people told us that it was expensive. We explained to them that other physical options cost twice as much and, more than anything, we encourage them to complete our free, 15-day trial. We love to be put to the test and show that Smartick is worth it.

It was an intense experience, we believe that we have planted a lot of seeds and will be back next year along with ICEX. Brand Spain. 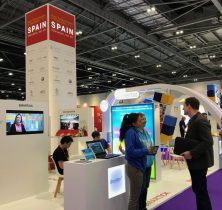