Welcome, again, to the Smartick blog. Today we are going to explain the exercises on subtracting fractions.

The first thing you need to know before going ahead with the exercises is how to calculate the least common multiple of different numbers. The following link will take you to the post where we explain the steps on how to calculate it: Least Common Multiple.

Already know how to find the least common multiple? Let’s move on, then.

If the fraction has the same denominator:

If the fractions have different denominators:

The first thing we need to do is find out the least common multiple of the fractions:

Now, we need to write their equivalent fractions with the denominator as 15:

In order to solve the numerator number, we’ll have to multiply the numerator (2) by the same number that the denominator was multiplied by.

And we do the same thing with the other fraction:

Now, we can subtract the two fractions:

Now, we need to make the equivalent fractions:

We multiplied the denominator by 5, which means we need to multiply the numerator by 5, too:

And we do the same thing with the other fraction:

We multiplied the denominator by 3, so, we multiply the numerator by 3:

Now, we can subtract the fractions:

Did you learn how to solve exercises on subtracting fractions?

Now, how about you put your skills to the test with the following exercises on subtracting fractions. 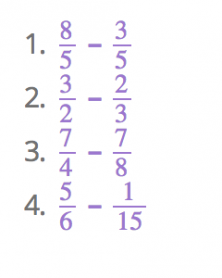 You can tell us the answers in the comments.

Here you can learn more about adding or subtracting fractions.