Asian Countries Remain Well above the US in Math: TIMSS 2015

Another international exam, another disappointment for the US. The publication of the results of TIMSS 2015, an international test which assesses performance in math and science across 49 countries, did not bear good news for the US. It showed no improvement from 2011, unlike the Asian countries which remain at the head of the field. Ten-year-old children in the US achieved a score of 539, compared with 618 in Singapore. The sample was taken from 600,000 children worldwide and was carried about by the International Association for the Evaluation of Educational Achievement (IEA), based in Amsterdam, in collaboration with the Faculty of Education at Boston College.

Aside from the Asian countries, the US also falls behind countries such as Ireland, Portugal, Russia, England, Kazakhstan, and ties with Denmark. It does at least avoid the ignominy of being in the group that performed worse than in the previous assessment, such as Finland, Germany, or the Netherlands. The National Council of Teachers of Mathematics has preferred to be optimistic and look at the trajectory since 1995, which shows an improvement, according to the interview given to the Washington Post by its president, Matt Larson. Larson believes the results show that the efforts made in the last 25 years are indeed having an impact. 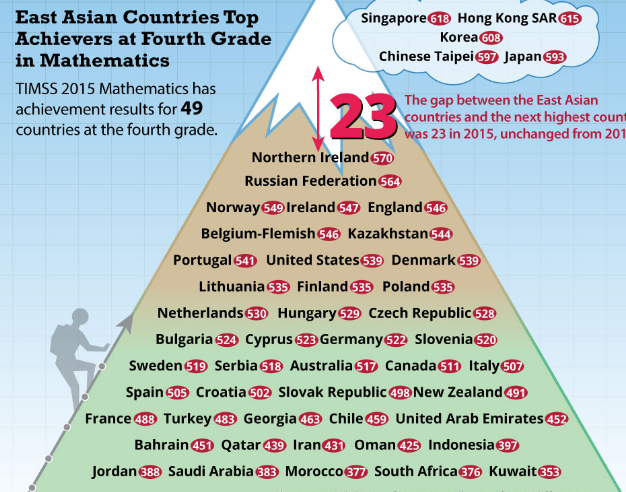 The study did find evidence to support educational policies. According to the report, there is no evidence that reducing the number of students in class across the years has an effect on the results. The sense of security in schools has increased, and two-thirds of children attending class say that their environment is safe and comfortable. Furthermore, the difference between boys and girls has decreased. Thus, looking at the global results in general, the conclusions are optimistic. Nevertheless, the US has a reason for pessimism when compared with the Asian mathematical superpowers. At least they have the consolation of having won the last two editions of the International Math Olympiad. With teams made up of children from Asian families, that is.

That’s why we at Smartick believe we can contribute a lot to a country like the USA. Our method, totally adapted to each child thanks to artificial intelligence, helps children to advance beyond school level, which is key to achieving the same proportions of gifted and talented children as places like Singapore or Hong Kong. At the same time, no child gets left behind because they haven’t understood what’s being taught in class. Smartick also adds new content to the platform every six weeks, and we use Singaporean methodology in some lessons. That, coupled with the promotion of good study habits and the effort involved in doing 15 minutes of math per day, makes us an excellent solution not only for the US to win the Olympiad, but also improve in TIMSS and PISA.