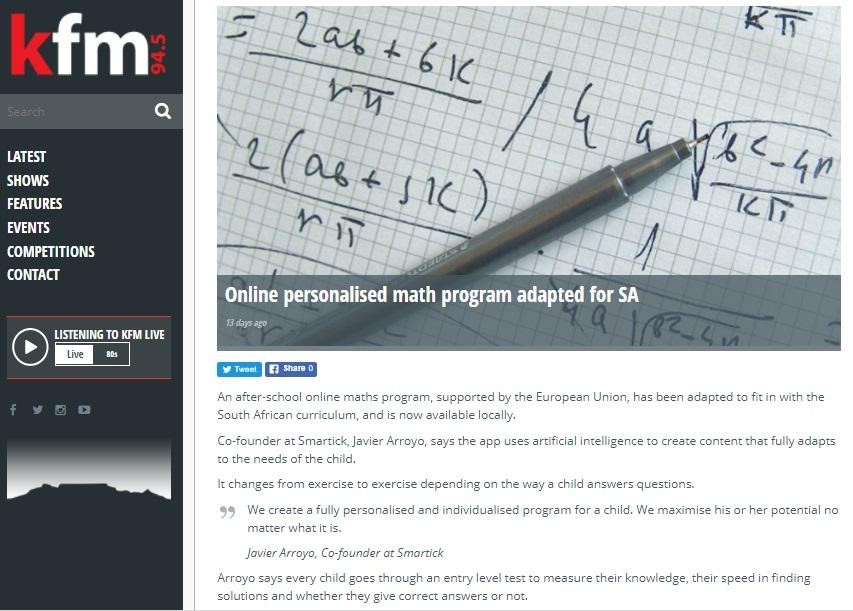 KFM recently covered an interview by Javier Arroyo, co-founder of Smartick, on The Kieno Kammies Show.

Arroyo explained how the idea of Smartick was born – as a start-up created to develop an online learning method that would improve the maths skills of children between the ages of 4 and 14 years. So, together with his partner, Daniel González de Vega, they devised a method based on Artificial Intelligence that provides a personalised curriculum adapted to the pace of learning of each child.

Arroyo explained that Smartick arrived in South Africa five years it started. He also stated that during that time they have helped more than 32,000 children from all over the world improve their maths skills, and not just mental calculation, but problem-solving skills, logic, arithmetic, and geometry.

Arroyo explained that it doesn’t require a huge effort on behalf of the children but that it’s not a game, it’s a learning system. Daily sessions last just fifteen minutes and can be performed on PC or tablet, the system gives instant feedback to incorrect answers, offers positive reinforcement, and gamification elements. Children can earn ticks based on their performance, which they can spend on their avatar in the Virtual World and can improve their cognitive skills with a wide variety of scientifically-designed games.