Consecutive Interior Angles: What They Are and How to Find Them With Examples

In this post, we are going to discover what consecutive interior angles are and how to differentiate them from other types of angles. You will see some examples and even a little quiz.

But before we start, let’s review what an angle is. An angle is the portion of a plane between two rays that are joined by a vertex.

If you would like to look into the definition of an angle more or review the types of angles, we recommend reading this post from our blog: Introduction to Angles.

What are Consecutive Interior Angles?

I’m sure that the word consecutive rings a bell. According to Merriam-Webster, consecutive means ‘following one after the other in order.’

In this case, since we are talking about angles, we can say that a consecutive angle is one that follows another. But…this definition should be improved by taking into account that consecutive angles share a vertex and one of their sides.

What do we mean when we say they have a common vertex? Easy, it means that both angles start from the same point.

We’ll be able to see it more easily with the help of some pictures.

The alpha (orange) and beta (yellow) angles are consecutive because they share the vertex and a side. 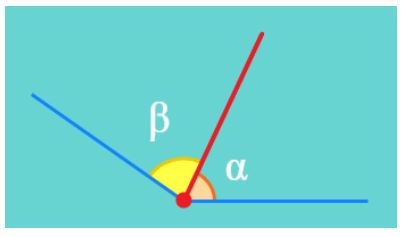 The red side is shared by both angles.

The purple and orange angles are not consecutive because, while they share a vertex, they do not have a side in common. 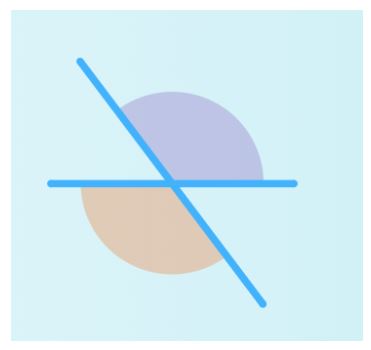 In other words, these angles are not consecutive because they only share the vertex, they do not share a side.

When are Two Angles Consecutive?

Two angles are consecutive when they have the same vertex and share a side.

These are three examples of consecutive angles that are also supplementary angles because they measure 180 degrees.

There are also consecutive angles that are complementary because they measure 90 degrees.

How about we see an example of a consecutive angle in everyday life?

Below, you can watch a video tutorial from Smartick about the relationships between angles.

Eva and Zoe are choosing different decorations for the wheels on their bicycles. With the help of this tutorial, you will learn the different relationships between angles according to their measurement and amplitude (complementary, supplementary, opposite, consecutive, and adjacent angles).

There is an example of consecutive angles included in the video.

If you would like to access our interactive tutorials, register with Smartick! The online math method for children ages 4 to 14 to learn and practice math independently. You’ll find interactive tutorials about angles, as well as many other primary school math topics, and exercises adapted to your child’s level. Take advantage of the free trial period!

Show What You Have Learned With Various Exercises

Are you able to identify a consecutive angle? Look closely at the shared angles.

You should think about whether or not these three images are consecutive angles or not.

Image 1: They are not consecutive.

Image 2: They are not consecutive.

Image 3: They are consecutive.

With Smartick you can practice and learn primary mathematics during 15-minute daily sessions. After you complete the session you can go to the Virtual World to compete with other children in Smartick, customize your avatar, and many more things that you can discover once you enter! Register with Smartick today!