Curiosities of Some Geometric Figures

We’re used to working with geometric figures. We find them outlining our notebooks, textbooks, or the screen of our tablets and computers. But today we’re going to look beyond these everyday items and discover the mysteries that some geometric figures hide, and how humans have used or adapted them for their own needs.

In this post we’re going to talk about two geometric figures: the regular pentagon and the triangle.

We’ll start with the regular pentagon and an old friend: Pythagoras. He was an Ancient Greek Mathematician and Philosopher. I’m sure you’ve heard of his famous theorem relating to right-angled triangles: The Pythagorean Theorem.

He made many great contributions to philosophy and mathematics, and shared them with the few students at his school. I say few because it was a somewhat elitist school that not everyone could attend. The members of the Pythagorean School were identified by a star pentagon (usually known as a pentagram or pentacle) which is formed by joining the non-consecutive vertices of a regular pentagon. 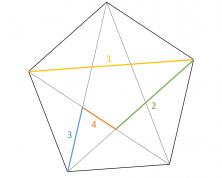 The second geometric figure we’ll be looking at in today’s post, the triangle, offers up a interesting anecdote. It’s protagonist is one Thales of Miletus, another ancient mathematician who discovered 5 very important theorems for projective geometry.

The first of these theorems states that “if a line is drawn within a triangle parallel to any of its sides, a triangle is obtained that is similar to the given triangle”. Using this theorem, he managed to calculate the height of the unexplorable pyramid of Cheops built by the ancient Egyptians. Using this premise, we can establish the relationship of proportionality that exists between the sides of two similar triangles. This was the key to Thales’s calculations.

Where he already knew A, B and C.

Do you want to try it for yourself? Find a building in your neighborhood, or a tree in a nearby park, and calculate its height. You’ll realize how useful geometry can be, lifting us up to the top of the highest towers without moving from the ground.

And if you want to learn more about the secrets that geometric figures hide, here are some questions that have entertained many mathematicians throughout history: