In today’s post, we are going to talk about Venn diagrams.

Venn Diagrams are used to graphically show the grouping of elements in sets, representing each set in a circle or an oval. We are going to look at and study examples of 2 sets: Set A and Set B.

These two sets show 2 elements that cannot have anything in common.

For example, set A consists of yellow squares and set B consists of green squares. The Venn diagram would look like this:

There is another type of Venn diagram which is the one with a common area between sets A and B.  This area is called an intersection (inter). 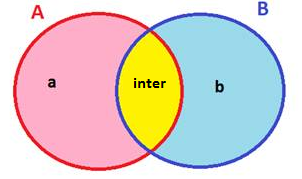 For example, set A consists of squares and set B consists of green shapes. The diagram would look like this:

Let’s look at another example, one which appears in Smartick’s logic section:

We asked 7 of Louis’ friends:

How many of you have dogs at home?  5 raised their hand.

How many of you only have cats at home?  2 raised their hand

How many of you have dogs and cats?  2 raised their hand.

According to the survey, would you be able to tell me how many only have dogs at home?

We are going to analyze the information:

They are asking us about people who only have dogs, and that information is in area A.

We put two little balls in the intersection zone representing those who have both cats and dogs.

If 5 people have dogs, and we already know that 2 have both cats and dogs, we can do the subtraction to find out how many only have dogs:  a = 5-2 = 3

Answer: 3 people only have dogs at home.

We hope you liked this post. You can learn more about Sets and Subsets on this previous post on our blog.

And you can try Smartick for free to learn more elementary math!