We are going to take a look at some straight lines in today’s post. The first thing that’s on the agenda is to define what exactly straight lines are in order to differentiate them from curved lines. Then, we’ll have a look at the concepts of rays, line segments, and open rays.

What is a line?

Every line is made up of points, which is the smallest graphic unit.

A series of points that are lined up one after another make a continuous streak, which we will call a “line.”

When the points always go in the same direction, they form a straight line. Imagine if we could see each and every one of those points that form a line, it would probably look something like this.

When the points, while still maintaining an order, constantly change direction, they form a curved line. If we could see each and every one of the points of a curved line, it might look something like this.

What is a ray?

A ray is a straight, infinite line: it never ends. It’s impossible to visually represent these lines so we draw rays without a point on its ends, understanding that this means that the line doesn’t stop there but rather, it keeps going on until infinity.

To name a ray, we use lowercase letters, for example: 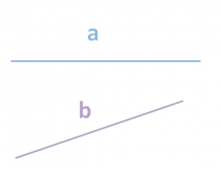 However, we can also cap off these rays, and by doing this, the ray would become a line segment. Each one of this segment’s ends represents the last point of the ray. These points, or ends, are written in uppercase and are named according to its two ends:

If we limit this ray only on one of its sides, the result is an open ray. The open ray starts with a point, which we will call the origin, and from there, it goes on until infinity. We also give the origin a name with an uppercase letter:

And that’s all for today. What did you think about this post? Did it help you understand what straight lines are?

If you want to learn more, sign onto Smartick and try it for free!