How to Calculate Least Common Multiple

In this post, we are going to see what the least common multiple is and how to calculate it.

The least common multiple (LCM) of two or more numbers is the smallest number (not counting 0) which is a multiple of all of the numbers.

In order to better understand this definition, we are going to look at all of the terms:

Following with the previous example, we are going to see the common multiples of 2 and 3.

You will see that there are common multiples between two and three, which are emphasized in green in the picture: 6 and12.  Keep in mind that the multiples are infinite and we have only shown the first two in this example.

Following with the previous example, if the common multiples of 2 and three 3 were 6 and 12, the least common multiple is 6, since it is smaller than 12.

To continue, we are going to see how to calculate the least common multiple.  You can use two methods.

Is what we used before, in other words, we write the first multiples of each number, we note the multiples that are common and we choose the least common multiple.

The first thing we have to do is break down the prime factors of each number.  After, we will have to choose the common factors and not the greatest common to the greatest exponent, and finally, we have to multiple the chosen factors.

We are going to look at an example of this, calculating the LCM of 12 and 8. 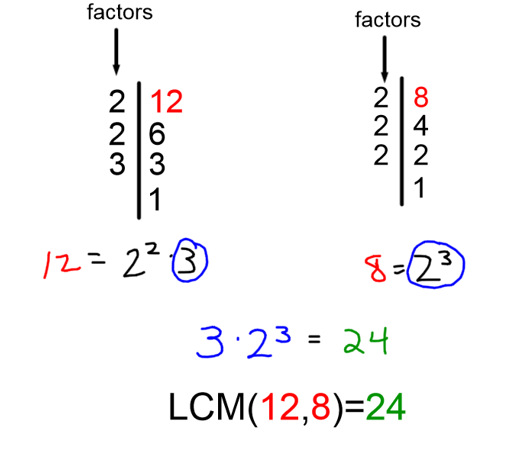 We are going to break down 12 and 8 into prime factors:

You can practice some online exercises about LCM and more elementary math in Smartick. Try it for free!