Units, Tens, Hundreds. Learn How They Are Used

In today’s post, we are going to review Units, Tens, Hundreds, and see some examples of how they are used.

It is the smallest natural number. We are going to represent a unit with a cube:

To abbreviate the word unit, we will write U, for example:

Let’s look at a larger number of units:

There are a lot of units, right? Well, imagine how many there would be if we use an even bigger number of them!

Because of this, we use the tens which groups the units into groups of 10:

We are going to represent the number 18 using tens and units. You should know that we abbreviate ten with the letter T. As shown: 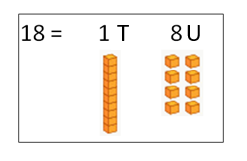 A ten is a greater value than a unit. A ten is composed of 10 units. Here are other examples:

But the same thing happens when we get to 100. For example, look at how the number 101 would be represented with tens and units:

Therefore, we use the hundred which equals 10 tens or, which is the same as 100 units:

We abbreviate hundred with the letter H. Here are two examples:

Now that we are familiar with the units, tens, and hundreds, we are going to look at the positional value of the numbers.

We are going to organize the numbers we have seen in a table, according to these instructions: 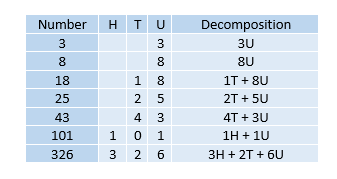 Did our lesson help you to better understand units, tens, and hundreds?

If you want to continue practicing, we have a lot of these types of exercises on Smartick… And much more! Try it for free.