In this week’s post, we’re going to look at what the rule of three inverse is and how to use it to solve problems.

Let’s take a look at what inverse proportionality is so that we can see learn how to apply it later on in this post.

What is Inverse Proportionality?

We have 2 magnitudes (A and B) and we need to observe the relationship that exists between the two. In order for the inverse proportionality to occur, we need to make sure that these two rules are fulfilled:

This means that the proportion between the two magnitudes is inverse.

For example, in the following table, you can see A and B’s magnitudes: 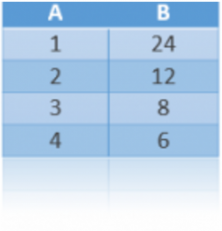 It’s an inverse proportionality because as long as A gets bigger, B gets smaller which is exactly what Rule 1 outlines.

How Do We Use the Rule of Three Inverse?

The rule of three inverse is used in problems where three of the four numbers that are proportional are known and the fourth number is what needs to be solved.

How Do We Solve a Problem with the Rule of Three Inverse?

First, we have to determine if the proportionality is direct or inverse:

If the number of ducks increases, then the number of days the food will last decreases and it is possible to think that if there are twice as many ducks then they will eat the food in half the time. So it is inverse proportionality.

It takes 12 days for 3 painters to paint a house. How long will it take for 9 painters to do the same job?

First, we need to determine which kind of proportionality it is.

It takes 12 days for 3 painters. 9 painters…will they take more or less time to do the job?

Since there are more painters it will take less time to finish the work and it is reasonable to think that with three times the amount of painters that the job will be done in a third of the time. Therefore, it is inverse proportionality.

Now, we just need to apply the rule of three inverse:

It takes 4 days for 9 painters to paint the house.

If you would like to keep learning and practicing elementary math adapted to your level, register with Smartick and try it for free.