Is It Good to ¨Mix¨ Alternative Algorithms, Such as ABN, with Traditional Ones?

We often receive enquires about the compatibility of the use of Smartick and learning alternative algorithms that differ from the more traditional ones.

To ease the concerns of moms and dads who might think that what their children learn at school could conflict with what they work on with Smartick, we wanted to offer an answer in this post.

We’ll start off by clarifying that using Smartick does not conflict with any alternative approach to algorithms at school.

Our position on the use of alternative algorithms such as ABN

This position is based on the following points:

Many innovations that have been known for years have never been fully extended and have not become widespread enough in schools.

Innovations such as the use of blocks, sticks, and coins promised to facilitate the learning of algorithms with visual understanding.

It’s not that these innovations did not offer a fundamental contribution to the teaching of mathematics, but more likely they weren’t properly implemented from the beginning.

Other types of innovation sink in easily in centers that teach alternative algorithms.

One of the great contributions of movements such as ABN is the questioning of the foundations of the mathematical learning implemented in schools.

When the traditional idea of education in the early years is based on “learning to read, write, and the four rules”, changing the rules of the four basic arithmetic operations, allows you to change everything else.

Because of this, we see traditional didactic resources incorporated into the ABN Method, such as sticks, coins, the number line, or the 100 square, which find their ideal space in this innovative environment.

We see that manipulative materials are not an approach to mathematics that has failed, but an approach that has not been sufficiently explored and extended.

Conclusions on the use of alternative algorithms such as ABN

At Smartick, we think that students at schools that teach algorithms which are alternative to the traditional ones are in the best conditions to learn those traditional algorithms and can benefit a lot from this learning.

For the most significant learning of traditional algorithms, we use virtual blocks as manipulative support material. The following example shows how students working with Smartick learn to subtract using blocks.

Subtract. You can use the blocks to help you 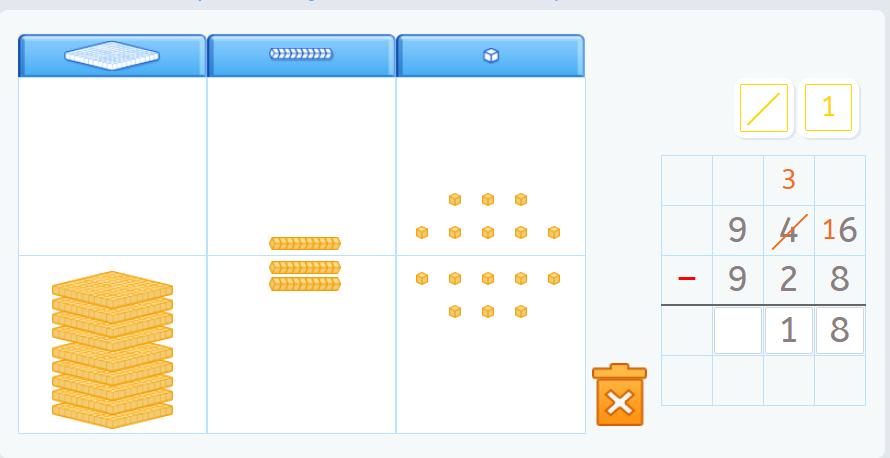 We think that the union of alternative algorithms with the study of the traditional ones, supported by blocks, contribute to a more complete learning of the arithmetic operations.

Therefore, far from being incompatible, we believe that they provide the student with a better understanding of the algorithms and a greater development of numerical understanding.