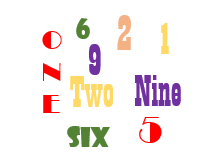 We have to take into account that due to the diversity of our languages, the verbal form in which we describe each number varies according to the language in which we are speaking or writing. In contrast, the graphic symbols are common for anyone who uses this system of numeration.

Numerical transcoding is a mental process by which we translate numbers from one format of representation to another, making it possible to translate into Arabic numbers (6) that are in verbal format (six). The aim is to translate from a system of morphosyntactic marking rules (derivative suffixes and compositional morphemes of the language) to a system of rules that uses the resource of the position to mean powers of ten.

This process takes place in a specific region of our brain that activates when we move from using a capacity that we share with various animal species, “perceptual arithmetic thinking” to another that is exclusive to the human being, “calculating symbolic thinking” .

When children arrive at school they already have a fairly developed management of the system of verbal numeration – the system of words that refer to numbers. Learning then focuses on the numerical decimal system and the cognitive and motor routines that allow its writing.

At Smartick we know the importance of transcoding numbers and we develop activities that promote the correct assimilation of this process for our students in the later stages of infant and early stages of primary education.