Learn How to Use Roman Numerals

How are Roman numerals used?

Roman numerals are formed from letters: X, L, I, C, D. Each letter has a numerical value: 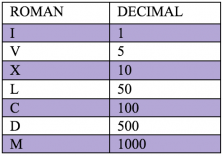 To represent Roman numerals, we must use these letters, combining and ordering them. You have to follow some rules:

When a symbol is placed to the left of another with a higher value, it is subtracted.

As you can see through the explanations above, you need to know how to add and subtract in order to use Roman numerals correctly!

What are the Roman numerals used for?

Today, we still use Roman numerals for some things. For example, in the following cases:

Did you like this post? Have you learned something new about Roman numerals? If you want to keep learning, click here and start a Smartick free trial.