Our teaching team here at Smartick works constantly so that our students have new and improved content that is based on the most recent teaching studies.

These improvements happen every six to eight weeks and are the result of a long process. They start with studying the kind of content that needs improvement, to detect gaps that are too big in our lesson sequence and content that we already have. The hope is that, every so often, our students can enjoy new content (that’s why the percent of completed content is sometimes lower!). Today, I’m going to tell you about the most important changes that we incorporated in the last version update – we hope you like them!

The first of the changes is designed for our older students, those who are nearly at the end of Smartick’s study plan. We all know that Algebra is one of math’s more difficult branches for our youngest students. The “problems with equations” are pretty tricky and are usually taught in this subject. Thus, we tweaked some things so that at Smartick, students can count on a sequence that will help them learn how to face these kinds of problems step by step.

The first ones that we’ve incorporated are the ones that we call “finding the number.” There are 28 problems (where students work with subtraction, addition, multiplication, and division) and two ways of figuring them out.

The first way is: 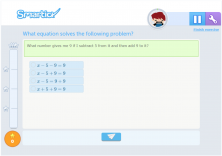 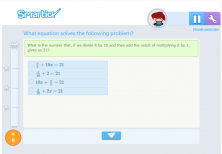 In the first problems, the students only have to select the equation to solve the problem.

In the second, they have to directly enter the answer to the equation: 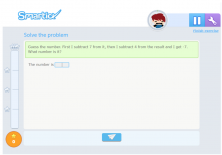 We’ll soon have an equation editor and children will be able to write out the equation that solves the problem!

Geometry problems are very important for our students to develop spatial visualization and geometric reasoning. Smartick already used symmetry content, but they were problems that dealt with recognizing symmetries, so we thought… why don’t we have the students make the symmetrical shapes themselves? And from there, the new symmetry problems arose: 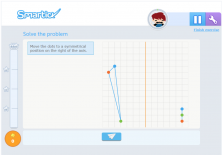 As you can see, we give them a simple shape and a symmetrical axis. The students need to drag the points that are on the righthand side of the graph in order to make the symmetrical shape: 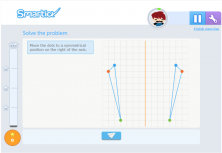 In this example, we also developed a sequence where students will learn how to solve more complicated problems such as the one below: 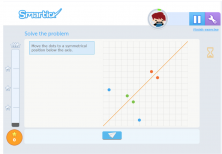 The word problems are quite a headache. We have to think about the information that we’re given and introduce them in a scenario so that children read them and, using operations, solve them. What would happen if we put the students in our shoes? That’s to say, instead of solving the problems, if they had to give the information needed to solve them. This is what we came up with and it seemed like a good way to change up the problems. Furthermore, this way, children won’t feel like they’re constantly doing the same thing, and they’ll keep on learning.

We’ll call this kind of problem a “creative problem” and it’s one of the updates that we’re most proud of: 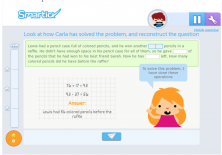 One of the last teaching updates that we incorporated is the base 10 blocks. It’s a manipulative resource, that’s to say that the children learn by using a tangible object that they can touch or manipulate. The blocks provide them with 1’s, 10’s and 100’s pieces.

We started with a specific scenario: shopping. We give them an object that they have to buy and the students have to think about how many pieces they need to group together in order to buy that object. They have to use the least amount of pieces possible, so we first make them “fill” with the bigger pieces and when they can’t use them anymore, they move on to use the smaller pieces. For example: 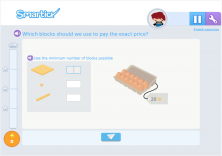 These problems are only the beginning of a series; little by little we’ll incorporate new scenarios and typologies so that the children learn with varied and enticing material.

As we mentioned at the beginning of this post, we also work a great deal to incorporate content that we need to “complete”, or in other words, we constantly look for “gaps” in our sequences so that the students can access a lot of material that’s as varied as possible. Our solution is this last update that we’re introducing today; the last, but definitely not the least!

Time problems are problems that children face every day, when they calculate “how much longer till recess?” or when they negotiate “how much longer can I play my game?” We already had problems with clocks, but they didn’t have scenarios, they only had one question. That’s why we’ve incorporated these kinds of problems with different scenarios that are relevant to children. We’ll show you a few, but there are plenty more! 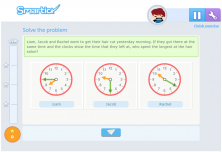 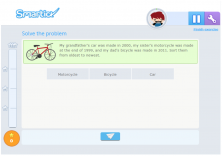 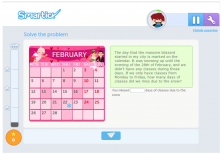 That’s all of the updates and improvements until now. Our students will be enjoying much more new content very soon. We hope you like it!

If you want to know not only the new Smartick content but everything you can learn, try it for free!