Greater Than and Less Than Symbols

In order to indicate if a number is greater than or less than another, we use the symbols > and <.

These symbols look very similar and even though children can interpret them from an early age, it is still easy to confuse them.

In this post, we are going to show you a trick to help you from getting confused!

There once was a dinosaur,

whose name was Ronny.

He lived in a cave,

and only ate hamburgers, no matter how scrawny. 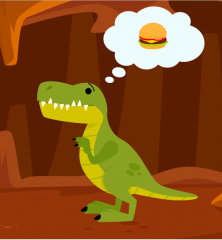 He was always hungry

and when choosing between two,

the greater number is what he wants to chew.

And with two groups,

he leaves the smaller amount.

When a group is equal,

he doesn’t know which to pick

This symbol expresses that the number to the left is less than the one to the right. For example, 2 is less than 6, so we write:

This symbol, which is much easier to recognize, is used when we want to express that two quantities are equal.

In the next Smartick update, which will happen in two weeks, we will be publishing a new interactive tutorial with the complete story about our friend the dinosaur.

Don’t forget to register with Smartick to watch the tutorial and practice with greater than and less than symbols!

And if you would like to learn more about symbols in mathematics you can review these previous posts from our blog: