IMO: The Best Math Problem Solvers in the World 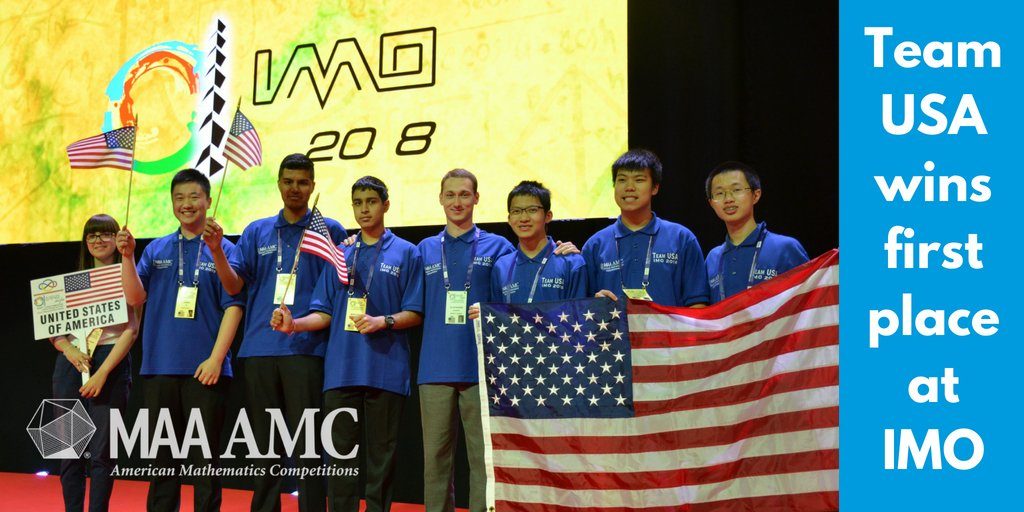 The U.S. just won this year’s International Mathematical Olympiad (IMO), which was held in Romania. The team won for the third time in four years, after decades without a victory. We know that these Mathletes are outliers, but so are NBA basketball players. Take the team’s coach, Po-Shen Lo, who usually says so in videos where he asks students to be as motivated with math as they are with sports. Children need examples; they need to know that there are other kids out there who are utterly fascinated by the possibility of making the world a better place with numbers, understanding how numbers work, and mastering the universal language that is mathematics.

“The six U.S. team members also took home five gold medals and one silver medal for their individual high scores in the competition, known as the Olympics of mathematics competitions for high school students. The first place U.S. team score was 212 out of a possible 252 points. The teams from Russia and China took second and third place respectively in cumulative team scores,” explained the Mathematical Association of America, after the IMO. The 2018 U.S. International Mathematical Olympiad team members are Adam Ardeishar, Andrew Gu, Vincent Huang, James Lin, Michael Ren, and Mihir Singhal. Gu, Huang, and Lin also competed in 2017, and Lin earned a perfect score.

Congratulations to over 600 students that went to Romania for the IMO. Their trip was the result of the hours of training, the joy of working through problems, hard work, effort, perseverance, and happiness about doing what they truly enjoy– no matter how strange it may seem to their peers. It must have been a pleasure for the Mathletes to have spent a few days with students from all over the world, united by their love for math.

Congrats to all of them!

We would also like to recall Po-Shen Loh, the man who thought that the U.S. team could exceed expectations. He is the coach running the Carnegie Mellon program that attracts students from various countries. He deserves part of the credit because he designed a plan to win the IMO, and he proved that his plan worked.

At Smartick we have to admire that kind of effort and determination. We want to make sure that children ages 4 to 14 learn to love mathematics and be problem solvers. We are also happy if children just start to feel more confident with numbers–that’s our goal. Our gold medals are that children don’t throw in the towel with math and that every day, with us, children feel how they can be challenged with confidence.