Student-Focused Learning and the Future of Education

We had the honor of having a conversation with Jevron Epstein who is the founder of a unique group of schools called Generation Schools.

Click on the YouTube link to watch Jevron’s full episode where we discuss student-focused learning. This episode is brought to you by Smartick.

Register for a FREE trial.

About Our Guest: Jevron Epstein

Jevron Epstein has a background in Human Behavior and Finance studies and furthered his education by completing CFA Levels 1 and 2 as well as qualifications in Montessori teaching.

Jevron is the founder of a group of schools called Generation Schools. These schools incorporate a future-focused education system that aims to dismantle the prior structures and beliefs of traditional single-subject, outcome-based education and instead emphasize a thematic, personalized, holistic approach to education and human development. Armed with his experience and knowledge, Jevron has developed an education methodology that effectively combines the Cambridge curriculum with the Montessori philosophy.

Jevron has recently taken on the role of Chief Operating Officer at the Cornerstone Institute, which celebrated its 50th anniversary this year. Cornerstone is an independent, nonprofit higher education institution engaged in teaching and learning in the service of others to advance human dignity and social justice for all.

Student-focused learning is at the core of what Jevron stands for, believes in, and built his school’s philosophy on. Jevron has the future of education in the palm of his hand.

1. The challenges of establishing a new education model.

3. The shortcomings of the current education system and how to repair it.

4. The importance of mathematics, software development, and financial literacy.

5. How to ensure and care for mental wellbeing at school.

Some Interesting Points About…

PvZ: Nice to have you here. So to start off with, just tell us a little bit about yourself, maybe, and your education journey. How did you get here?

JE: Okay, so I went to 13 different schools growing up. When I was born, my father’s Jewish, and my mother was a Christian, so we started off by sending me to a Jewish day school. It was called Kerem. And then I went to a school called Menorah…

During those 13 different schools, I gained lots of experiences from what worked and what didn’t work in those environments. I then went further on to study a BCom, a dual major in Finance and Psychology. And then ventured into the financial world, and said I wanted to be rich, so I needed to do something that had numbers involved.

I worked for a company in Johannesburg doing listings onto the exchange, and it was soul-destroying. So I came back to Cape Town and then decided I would start a small accounting practice that were just accounts for schools, so I could understand the financial metrics of a school. Built the business up to about 100 different entities within that schooling accounting system, and realized I wanted to build my own school.

So I studied the Montessori Early Years qualification because I found that during my experience that was the most practical form of education, Early Years.

PvZ: So coronavirus, 2020, crazy year. How has that impacted your schools, and what have you done in order to accommodate the challenges that coronavirus has posed?

JE:… It was difficult. I can’t say that it wasn’t a challenge. But if a school group is created on constant change and change can either be destructive or constructive. I wouldn’t say we were prepared for it, but we knew what to do.

So we were quite decisive. So we went straight online, and my schools are built on tech, so it wasn’t too difficult. And then we just managed to hold the spaces for our educators and students who felt vulnerable during this period of time. But also being exposed to all of the harshness, what COVID did to their family members, people in their neighborhoods, etc.

So we made a decision and we just moved forward. We’ve now gone back to our bricks-and-mortar schooling, and I think we’ve got a 10% vacancy of students that are still on our digital platform, and that’s decreasing every day. So I think it was just being prepared for change, and then making a decision and moving forward with it.

PvZ: So if you had a magic wand, what would you fix in the world’s education right now? What’s that one glaring issue that you think needs attention?

JE: I think it’s student-focused learning. I think we’re all individuals and I think schooling is built on a structure that doesn’t exist…So if every student has strengths and every student has weaknesses, focus on their strengths, understand their weaknesses. But to do that, you can’t have an assessment-driven qualification. So to give you an example, you have individuals that talk about IEB. IEB is an enriched curriculum, but it is actually only offered in grades 10, 11, and 12. And if you actually go a little bit further, it probably just grades 11 and 12. So what happens all the way in between? Why not use all that time to prepare the student by utilizing all the tools that they can use? So I think my magic wand would be to actually remove the form of assessment that we’ve got, and make it individually driven, and we can utilize technology to do so.

PvZ: … And for me, a traditional education, or at least, let me rephrase that, a successful education is one where you leave school with a deep curiosity or a passion for something. With that curiosity and with an Internet connection, you’re going to find your way.

And I wish I knew that when I was going into university because I felt like everything was preselected and preplanned for me. Very little of what I did was of my own doing, of my own decision-making. So that said, how do you define a successful education? When a kid leaves your school, what do you hope to have achieved?

JE: I think the child needs to know who they are, I think that’s the first thing. Know who they are, understand how they fit into the world, and to realize that no matter what, it’s just someone else’s perspective. And if they stay true to themselves and they have all the skill sets, what we would want is we want every child to leave our school, either being employed within our group, and/or provided equity to start their own business, or placed into an organization that they’re passionate about.

JE: I think, from an education point of view, so in Early Years, so our schools don’t allow technology until the age of 6. We don’t have the technology. It’s all blocks, bricks, and it’s dirt because that’s all for formative growth. That’s required for muscle tone, and for everything that you need to be a human.

Then we obviously have spaces of excellence. So we have this, it’s like an imagination box, where you can have things like holograms, drones, computers, etc. We know that parents provide the students with enough screen time at home, and they have the skill set already to do so. My 2-year-old daughter will go up to any screen, and because we have touch screens in our home, will try and change it by touching the screen, and then thinks that the TV’s broken. So, speaking from experience, I know what happens behind the scenes. 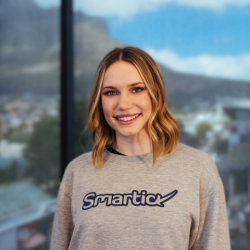 Sabrina Jansen van Vuuren
Sabrina Jansen van Vuuren is the head of Social Media for Smartick's English Markets and is also the founder and producer of Smartick's podcast called Future Minds with Phil.
She graduated from the AAA School of Advertising with a B.A. in Integrated Marketing Communications and prior to joining the Smartick Team she started her own digital marketing agency in 2014.
In her spare time, Sabrina enjoys horseback riding, reading, and going to the gym. She also loves to travel!